Child restrictions: Children in top end of bar only

This traditional pub, ideal for exploring the many pleasures of the Peak District, evolved from several stone cottages. In the same family for many years, it's set in a beautiful steep stone village and is named after an unbeatable racehorse of the early 18th c. A snug little right-hand bar is the best place to enjoy your Bombardier and guests from breweries such as Abbeydale, Castle Rock and Matlock Wolds Farm on handpump, and several wines by the glass. This bar was virtually built for chat with its dark beam-and-plank ceiling, dark wall settles, single pew, plain tables, a hot coal and log fire, a few team photographs, dominoes and cribbage; background music. There's a bigger, equally unpretentious bar on the left. As well as seats out in front, there are picnic-sets in the well tended back garden. The surrounding walks are marvellous and both walkers and their dogs are warmly welcomed; they keep doggie treats behind the bar. Now that there is no longer a village shop, the pub does sell some produce. 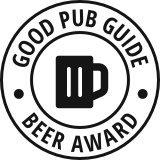 Set in the heart of this pretty village the pub retains the charm of an authentic British pub- where good real ale is top of the menu! The aim is quality at a reasonable price - WellsBombardier is a regular plus two changing guest ales .There are two bars - a cosy snug and a comfortable lounge, both have lovely open fires.People come here for a good pint, a friendly atmosphere or a game of dominoes! Walkers, dogs and children are all welcome. Dog treats are kept behind the bar (or in pockets of a number of the locals!) There is also a lovely garden at the back where customers are invited to enjoy their drink or some lunch. Light & simple home cooked food is available at lunch time (12-2pm, closed Mon & Tues lunch) Homemade soups & casseroles, filled cobs etc all sensibly priced!

We serve light lunches during the day including sandwiches, hearty soup, jacket potatoes, vegan burgers, pasties and many more specials. We offer a wide range of home made plant based options and can cater for gluten free and other intolerances.

Using the post code your sat nav will get you to the bottom of the village, the pub is at the center of it, have a drive around, you won't find it to hard to find us, and if nothing else, you'll have a lovely drive around one of the Peak Districts most beautiful and hidden gems.